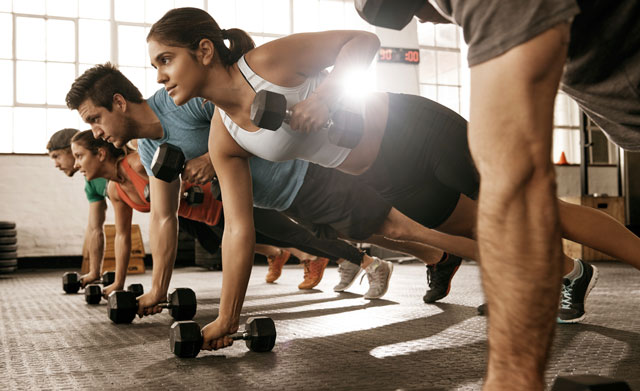 Flavay Plus® with phosphatidylserine significantly improves endurance, cortisol levels, muscle soreness and a perception of well-being after exercise. (121,144,145)

A number of double-blind, placebo-controlled clinical trials show how phosphatidylserine can prevent and improve exercise-induced cortisol levels and other markers related to hard training.

(PS) in Flavay Plus® results in a measurably better perception of well-being after exercise. (121)

(PS) in Flavay Plus® can significantly improve muscle soreness in soccer players. (259)

A double-blind, placebo-controlled study at California State University investigated the effects of phosphatidylserine on hormone levels, muscle soreness and feelings of well-being in experienced weight-trained athletes. The program was designed to over-train the athletes. Subjects were instructed to train as hard as possible four days a week each during a two-week training period, and to use as much weight as possible for each exercise. After a three-week washout phase, the same athletes switched treatments and repeated the workout program for another two weeks. 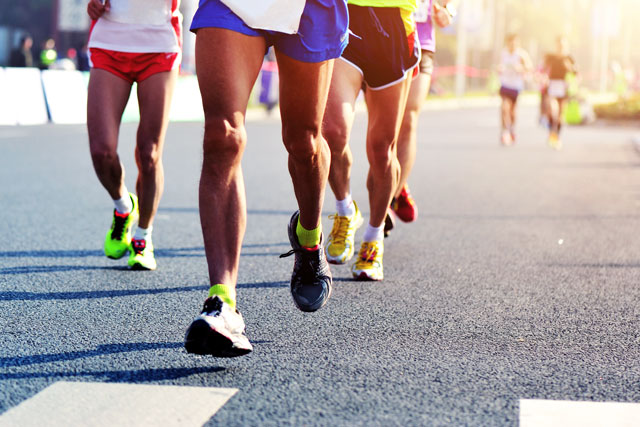 A double-blind, placebo-controlled, cross-over study conducted at St. Cloud State University showed that phosphatidylserine significantly lowered creatine kinase (CK) levels 24 hours after exercise. (Creatine kinase is an indicator of skeletal muscle damage after exercise.) After 15 days of taking either phosphatidylserine or a placebo, 12 trained runners performed a 90-minute run. Intense exercise will cause an increase in plasma and serum CK levels. The results showed phosphatidylserine significantly reduced CK levels, an indicator of reduced muscle damage, compared to the placebo. (120,228)

(PS) in Flavay Plus® can significantly reduce creatine kinase levels, an indicator of muscle damage. (120,228)

Another study found that exposure of muscle cells to phosphatidylserine results in an increase in activation of the signaling molecule mTor. Activation of mTor is known to play a key role in muscle growth and muscle strength. Thus, phosphatidylserine appears to play a role in increased muscle size and strength. More studies are needed to confirm these findings. (334)

Increase Endurance and Time to Exhaustion

(PS) in Flavay Plus® can significantly increase time to exhaustion in cycling. (258)

A double-blind, placebo controlled study using 14 healthy and trained male athletes underwent cycling exercise prior to and following the supplementation period. Endurance was measured using a cycle ergometer at 85% VO2 max. After ten days, the group taking phosphatidylserine experienced about 30% more time before exhaustion, while the placebo group experienced no change. (258)

A double-blind, placebo-controlled study using healthy male volunteers (ages 24-42), performed three sessions of bicycle ergometer tests at one-week intervals. As expected, the physical exercise resulted in a significant increase in ACTH and cortisol levels in the placebo group. However, the group that received phosphatidylserine found significant suppression in ACTH and cortisol response to exercise. (124) 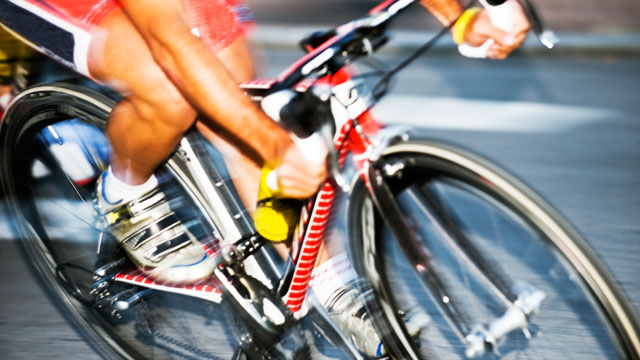 (PS) in Flavay Plus® significantly inhibits stress- and exercise-induced increases in cortisol. (124)

(PS) in Flavay Plus® significantly inhibits ACTH and cortisol (stress-induced and exercise-induced hormones) in exercise. (124)

Another double-blind, placebo-controlled, crossover study was conducted on healthy male athletes. Blood samples were taken at (1) rest, (2) after a 15-minute moderately intense exercise on a cycle ergometer, and (3) during a 65-minute passive recovery period. After ten sessions in ten days, results showed that cortisol levels were significantly reduced in the phosphatidylserine group, testosterone was significantly increased and the ratio between the two hormones was significantly elevated in the phosphatidylserine group. (216) 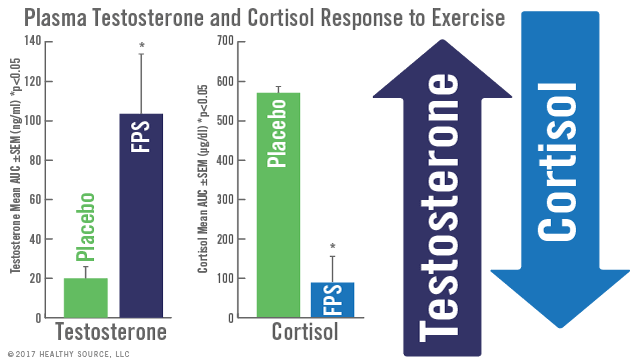 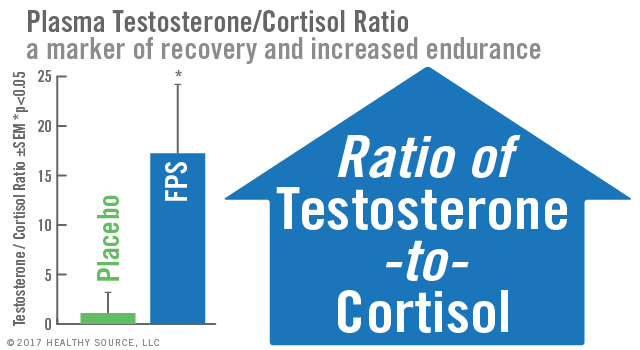 (PS) in Flavay Plus® significantly increased the ratio of testosterone-to-cortisol levels in response to exercise—indicating a reduction in exercise-related stress and improved recovery. (216)

Over-training is a natural hazard of competitive sports. During the early stages, your muscles ache, your heart rate and cortisol levels increase, and testosterone levels fall especially in male athletes. Your body can recover after a few days of rest but chronic over-training often causes an unhealthy ratio of the anabolic (muscle-building) hormone, testosterone, to the catabolic (muscle-wasting) hormone, cortisol.

So it's an athlete's challenge to optimize the ratio of steroid hormones testosterone and cortisol. Also adrenocortiocotropic hormones (ACTH), because ACTH levels increase after exercise and that leads to higher cortisol levels. This is why some athletes will use anabolic steroids (testosterone and its precursors) in order to build testosterone and inhibit cortisol levels. But long-term use of anabolic steroids can result in infertility and an increase risk of severe liver tumors, kidney disorders, heart disease and other health problems.

The good news is Flavay Plus® with phosphatidylserine is an effective non-drug and safe alternative in normalizing cortisol levels for athletes. (124)

I know taking vitamins is good for you but this is much more than that. Because of taking Flavay and Flavay Plus I experience substantial improvement in mental sharpness, acuity and in the ability to react quickly and stay on top of situations while auto racing.
—dentist* In 2006 I stopped taking Zoloft because it made me sick. That's when I found Flavay and Flavay Plus and I've been taking it ever since (12 years) and it gets me going every day. Such a difference in my life. It's been very good for me. My wife takes it too.
—Mr. P.Z.* 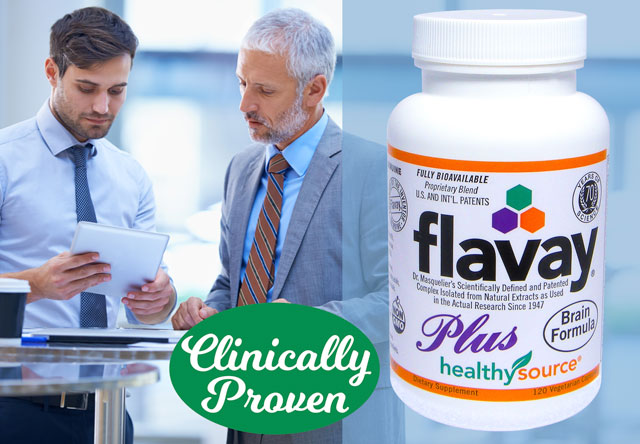 Change the way you grow older by protecting your memory for the many years ahead.

My husband swears by Flavay Plus. He's a truck driver and Flavay Plus keeps him calm and at the same time his energy lasts long. He wouldn't do without it. —Ms. C.K.*

I'm 26 and have a severe case of ADHD, and just recently started taking Flavay Plus. From the first week I was taking three to four pills per day, and feeling the results quite rapidly... I'm thrilled with the results I'm getting with Flavay Plus. —Ms. T.A.*

Taking Flavay Plus and I feel strong. —Mr. W.P.*

I just wanted to write and say WOW... I was so skeptical of your product at first and really had a negative attitude when I started taking it. I am a 40 yr old female with anxiety, mild ADHD and a host of arthritis and inflammation issues. It was a struggle for me to get out of bed everyday and focus on what needed to be done. I had no focus, no attention span, no energy, and no desire to do anything. About a week into taking Flavay and Flavay Plus, I started noticing that I could think a little clearer. My rheumatoid arthritis flare-ups weren't so bad, though I still have them. feeling better, and having more energy. I never thought I would feel like my old self again. I don't know exactly how you do it,...but this stuff works! I am telling all of my friends to try it because you've given me my old life back! Thank you! —Ms. L.A.*

I just love Flavay Plus. Ever since I started taking it I have deeper sleep. I think it's because it's relieving stress. It really is doing something for me. —Ms. P. Johnson*

I have used Flavay and Flavay Plus for almost a month and I really have not felt this healthy for so long. Fantastic energy and better overall. I have ms (small letters intentional, I hate it) and am feeling better even at work, people have commented my skin is better than it has ever been. I have great energy, it is incredible. —Mr. G.S.*

I know taking vitamins is good for you but this is much more than that. Because of taking Flavay and Flavay Plus I experience substantial improvement in mental sharpness, acuity and in the ability to react quickly and stay on top of situations while auto racing. —dentist*

After one month of taking Flavay and Flavay Plus, I feel really good. I feel younger, like I used to feel 5 years ago, so that I want to start a business, and other things like that. My wife says I even look different. —Mr. R.K.*

I take 4 capsules of Flavay Plus every morning and I can keep going all day, and I stay focused too. I'm going to get both of my sons on Flavay Plus. —Mr. T.C.*

I want to thank you for Flavay Plus, it's just wonderful. My anxiety, panic and stress levels plummeted and my skin became clear and radiant. —Ms. J.C.*

At 50 years of age I had come up with adult acne, with cysts and scabs all over my face. I've been taking 4 Flavay and 4 Flavay Plus capsules twice a day and in a two-week period my face is clear! ...We own our own business and have been traveling a lot lately, under the stress of a busy schedule, and yet my face just kept clearing up and now it's clear! —Ms. D.G.*

Flavay really helped me with my acne and it really calmed me down. I was very stress-free when I was taking it. —Ms. M.B.*

I've been taking 4 Flavay per day for about a month and the thing I really did notice is my stress level is really good. I've had a lot of unusual stress and with the Flavay I'm handling the stress a whole lot better. —Ms. S.M.*

My sister, Dianne, is doing awesome on Flavay. She recently did her 3rd week of house cleaning (6 hours, once a week), and came home with great energy - didn’t have to rest at all. —Mr. Al L.*

In taking Flavay and Flavay Plus I really notice in my concentration. It seems to help with that. I can tell a difference. Also, I feel like I look younger when I'm taking Flavay, in my skin and hair, it looks better. I've noticed a big difference in my sleep, I sleep better and I have more energy. Flavay is a wonderful product! —Ms. Lisa L.*

I used Flavay for almost three months and it was great. I had so much energy with it. —Ms. S.W.*

I want to thank your company for Flavay Plus. My aunt and grandmother had Alzheimer’s. In my early 50’s I was beginning to experience some memory problems, but not anymore, and I'm grateful. —Ms. Lynne M.*

I started taking Flavay and Flavay Plus for depression in January of this year. I’m very satisfied to have no withdrawal periods and no depression. I know it works because I stopped taking the products and my husband said he could tell the difference, that I wasn't 'as nice a person' when I didn't take them. And I could tell, too. So I started taking them again. —Ms. E.R.*

I’m a huge fan of these products Flavay and Flavay Plus... My grandson spent the weekend at my house and I didn’t feel as tired or stressed. —Linda M.*